I had been telling Cody that I really wanted a weekend away with just the 2 of us before our 2 newest family members arrived and we were busy for, well...the rest of our lives! He wanted to plan it and not tell me anything and he did a great job keeping it a secret! The only thing he told me was that the weather would be similar to Nashville's so to pack like we'd be at home all weekend. He pretended to slip up and tell me where we were going at least a hundred times, so it didn't surprise me when 2 days before our trip, he slipped up and said something about "the weekend after Chicago". I laughed it off and tried to move on, but he was so mad he had just said that, that he gave himself away and I knew where we were going. I was so excited to say the least! He was not excited I had found out when he worked so hard to keep everything a secret and tried to tell me that he changed the trip and we were now going to Atlanta. When we got to Atlanta, it was just a layover and we went to Chicago! We had such a great time. I was tired and swollen from walking so much and we had to rest a lot. By that point, I was 22 weeks pregnant with Hayden and Charlie and was starting to really slow down (Don't worry - Cody had the hospitals mapped out in case we needed one). Besides that, we saw everything we wanted to. We went on an architecture boat tour, which was beautiful. We went to the Science and Industry Museum, ate Chicago-style pizza, and went to Navy Pier. I have to say that the best part of the whole trip is that Cody budgeted time and money (we are big budgeters) for me to have a shopping spree on the Miracle Mile all day on the first day we were there. Major bonus points for the hubby! I've never had a shopping spree and it was SO fun. I think he might have been regretting that decision about 2 hours in to H&M shopping. It would have been a lot worse except that I was pregnant so I couldn't try many things on. I wasn't about to waste money on maternity clothes - YUCK! So fun! Thanks, honey. You truly are the best! :) 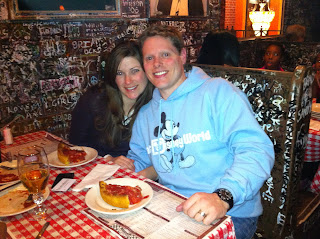 Chicago pizza after a long day of shopping 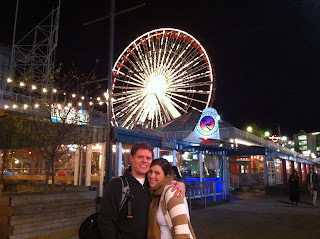 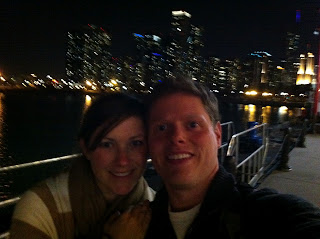 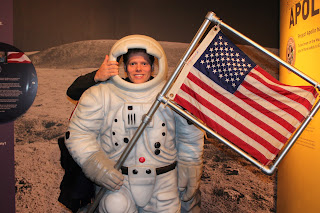 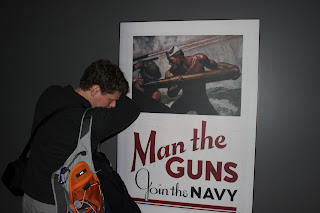 You are seeing this picture corectly - we are dorks 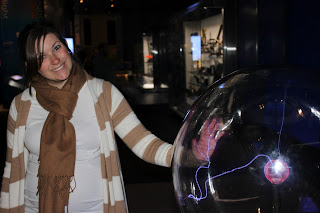