It's been entirely too long since I have blogged and there's A LOT to catch up on. I almost quit, but remembered that the main reason I do this is for my girls so that they have something to look back on. I'm going to jam a lot into a few posts probably and then try to do better! Here goes!

So - after the last blog of us at the beach, I found out (the day we got home actually) that I was pregnant again! Yay! We were so thrilled! When I was about 5-6 weeks along, I had some complications and called my doctor's office. The nurse told me to come on in and they would do a quick ultrasound to make sure the baby had implanted correctly and that I hadn't miscarried. She said to be there in an hour. I called Cody to let him know, but he had an important meeting he couldn't skip out on, so he couldn't be there. I thought that was no big deal. I was sure everything was fine, so there was no real reason for him to drop everything to come with me. So me and Everleigh went to the doctor by ourselves. The ultrasound tech told me that with it being so early she wasn't going to tell me anything about what I was looking at and that I would have to wait on my doctor to give me the report. There was no need for her to tell me what I saw on that machine. It was clear as day. 2 little sacs with tiny dots in each one were up on that screen. I laughed for a few seconds and then asked her if what I was seeing was really 2 sacs. She stopped the test and put her hand on my leg and said, "Yes, honey. There are 2." That's all I heard her say even though she was still talking. I was in complete shock. 2 BABIES!! Was I even ready for 1 more baby? I had been doubting that! And now there were 2 coming. I was in shock for a long time. I waited and saw my doctor - shaking - and then called Cody from the car. I wanted to tell him in person so I asked if I could come up to his work. Of course, this freaked him out because he thought something must be wrong if I wouldn't tell him over the phone. So I said, "The baby is okay. And so is the other baby." I think he might have thought I was talking about Everleigh except that then I started crying hysterically. If anyone else has ever been told they were having twins and were not expecting it, you may know the feeling. I had a million thoughts running through my head - how was I going to work? (you aren't going to); how are we going to afford 3 children? (prayer, faith and a hard-working husband); do I have to buy a van? (yes, but you will LOVE rockin' that van!); how hard is this pregnancy going to be? (so hard and painful, but well worth every single second of it); am I going to have to have a c-section? (nope); how am I going to breastfeed twins? (the good Lord gave you 2 for a reason! It can be done); I don't want to get fat! (too bad). Plus about a million more. Cody got me calmed down and told me to meet him for lunch and we would discuss everything. He made me feel better over lunch, but I have to admit, it took a little while before we were thrilled with this new change in plans. We waited a while to tell our family and friends. We needed some time to wrap our heads around 2 babies and all the changes that were coming our way. Our family was almost as shocked as we were, but so excited for us.

We found out pretty early with the million ultrasounds I had that we were having 2 girls! The pregnancy was hard. I had a hernia that was very painful and hurt to walk a lot of the time, so that ruled out exercise. My back hurt constantly. I was nauseous for the first 10 weeks (with Everleigh, I was nauseous for 15, so this was an improvement). I got bigger a lot faster this time around and all the aches and pains of pregnancy were multiplied. A lot of it was not fun, but there were some really cool things too. I could feel the girls kick me, but they would also have little "fights" and kick each other which was really cool to feel. Hayden got the hiccups several time a day and they shook my whole stomach (She still gets the hiccups almost every day and hates them). Hayden moved a lot toward the end and she flipped over every ultrasound (I had one every 2 weeks). Charlie (Baby A) was always head down like a good girl. :) She was also less active than Hayden. Charlie was very hard to get pictures of and hated the monitor they put on me. She would never stay still long enough for them to get a good heartbeat on her and the ultrasound techs always had a hard time measuring her. Hayden was amazingly still and was easy for them every time. I'm so glad to not be pregnant any more, but I would do it all over again in a heartbeat if I got them at the end again. They are wonderful and so worth it. We are so in love with them! More on that later though... 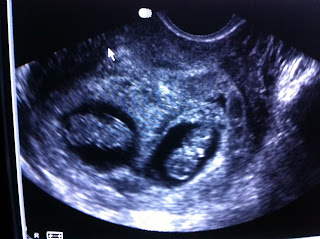 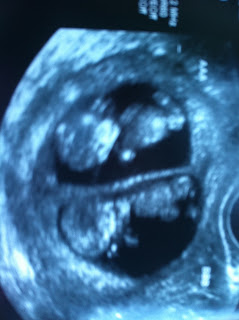 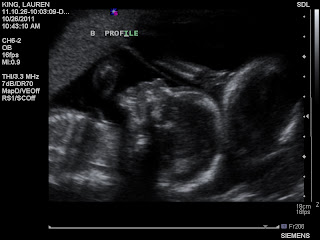 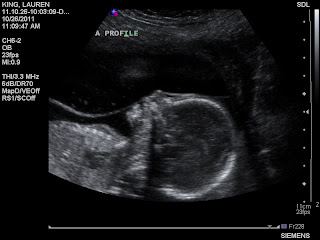 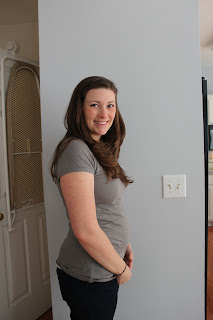 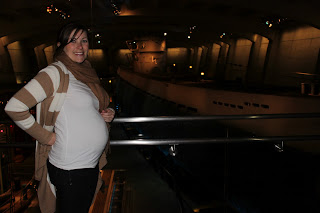 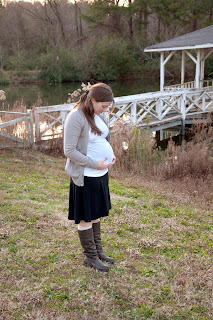 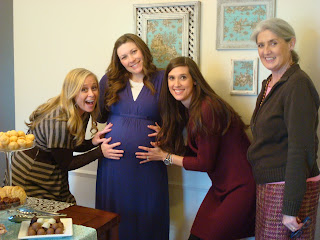