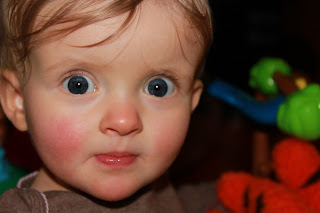 Everleigh is 11 months old. Here's what she's up to:
I know I say this a lot, but she really is the happiest, best baby. I know we would feel blessed even if she never stopped crying, but we do feel very blessed to have her in our lives. The next one will be 12 months (I refuse to say 1 year - hard to even type) and she'll be an official toddler. Everyone pray I don't cry too much at her party!
Posted by Lauren at 3:05 PM